On Friday April 15, mutual box 1200 was struck for Tower 1 to assist Culpeper County on a commercial building fire. Tower 1 was assigned to the “charlie” division once they arrived and was ordered to make access to the building and assist with fire attack. While Tower 1s Driver re-positioned the apparatus, the Firefighter forced entry through a security fence as the Officer met with the Division Chief and completed a recon lap from the ground. After Tower 1 was able to get close, the  Driver assisted the Firefighter in getting the fence opened up to give Tower 1 better positioned, after receiving and confirming orders from the Division Chief the Officer deployed a ground ladder to get a recon of the roof. Once all was completed the Tower achieved the best position possible and began to deploy to the roof. Once on the roof an assessment was made another lap completed and revealed the roof to be unstable. Tower 1 made the recommendation that all crews exit the roof and master streams be placed in service. Tower 1 flowed their master stream for a total of approximately 1 hour before being released by command. 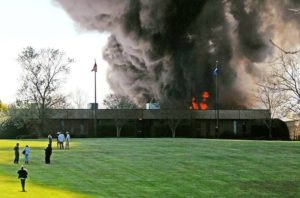 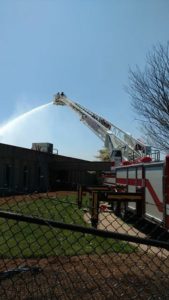 Permanent link to this article: https://www.warrentonfire.org/structure-fire-old-brandy-road/