On Wednesday, September 21st Rescue Squad 1 with a crew of 4 members participated in the Capital Shield 2016 exercise. Capital Shield is a joint training exercise in the National Capital Region that is hosted by the Joint Force Headquarters – National Capital Region. It brings federal, state, local and municipal agencies together to realistically test inter-agency operability during a crisis impacting the District of Columbia, Virginia, and Maryland. It also trains and prepares the Department of Defense to provide defense support to civil authorities and employ appropriate force protection measures as requested. In the case of Rescue Squad 1 and its crew they were assigned and operated at different locations within Fairfax County.

The Crew completed three scenarios over an 6 hour operating period and partnered with the U.S. Army 911 Technical Structural Engineering group to lift and move several heavy objects. Those scenarios included a victim suspended from a guard tower that personal had to use rope systems to lower the victim to the ground, rock quarry emergencies where a rock had fallen on a victim and needed to be lifted off of the victim and a quarry truck that had run over a victim and needed to be lifted. All victims were manikins and all injuries were simulated. All scenarios were conducted with equipment that Rescue Squad 1 carries. 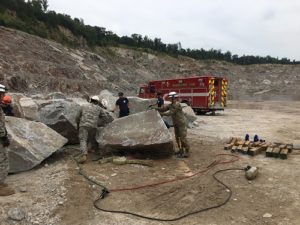 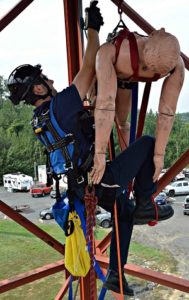 Permanent link to this article: https://www.warrentonfire.org/rescue-squad-participates-in-capital-shield-2016/